Featured article from the January 2023 issue of The Physiologist Magazine. 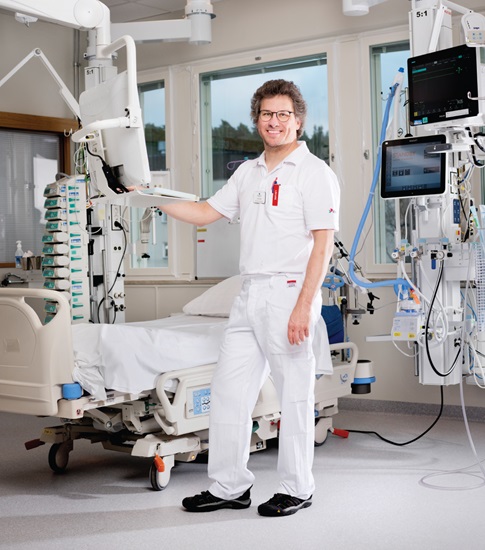 In early 2020, Sweden’s leading research hospital closed down all research labs in anticipation of the oncoming pandemic. While COVID-19 spread through China and Italy and countries worldwide braced for its impact, lab experiments and clinical trials at Uppsala University Hospital screeched to a halt.

Almost immediately, Michael Hultström, MD, PhD—a physician and associate professor of physiology—and his colleagues in intensive care sprang into action. No COVID-19 patients had been admitted; Sweden had yet to see significant spread of the virus. But surely, the hospital could do more than just wait for the sick to arrive. Hultström recalls how the intensivists challenged department heads and administrators with a reference to the hospital’s vision: “So you mean that the ‘leading international research hospital producing the most value for patients’ should not study a completely new disease?”

Over the course of four days in early March 2020, Uppsala changed course: Labs and trials could run as long as they focused on COVID-19. With fellow intensivists Robert Frithiof, MD, PhD, and Miklos Lipcsey, MD, PhD, Hultström got to work setting up a COVID-19 intensive care biobank. On March 13, Uppsala admitted its first COVID-19 patient to the intensive care unit (ICU) and the biobank received its first samples, kicking off a long first wave of the pandemic.

An ICU biobank had been in the works for almost a decade. Almost as long as Hultström had been at Uppsala, he’d wanted to study genetic causes of critical illness—those genes that make people more or less vulnerable to life-threatening syndromes, such as sepsis, acute respiratory distress syndrome or acute kidney injury.

His interests were always two-fold: physiological research and clinical work. That’s how he landed in a parallel PhD/MD program that led him to anesthesiology and intensive care—the medical specialty, he says, is “the closest thing to physiology you ever get in clinical medicine” because it’s so hands-on.

“You give drugs that have immediate effects … and you monitorthem,” he says. “You measure blood pressures and blood flows all thetime. If you give a drug, you see what happens—just like in the physiology lab.”

In 2013, Hultström finished his MD and started his physiology research lab at Uppsala. With his lab’s focus on cardio-renal failure in rats and mice, he was still steps away from researching human genetics, but the idea was there. And his work in the ICU showed him how valuable such research could be.

“We have nothing specific for treating you once you’re in intensive care that would improve your survival or treat your disease,” he says. “We know how to maintain physiological stability … but we don’t have, like, ‘Oh no, his kidneys are failing. Let’s give this treatment and then his kidneys will be fine.’”

Conversations with Frithiof and Lipcsey showed they had similar ideas. They all saw a biobank as a way to improve intensive care.

In February 2020, after years of talking about the project, the trio needed just a few more signatures to start a biobank in Uppsala’s ICU. The goal was to study sepsis, a condition often seen in intensive care. The biobank would store biological samples, such as blood and urine, associated with physiological information in a database that, over the long term, could be drawn from to explore research questions.

The pandemic retrained the project’s focus. After tracking down administrators and interrupting meetings for signatures to authorize the new COVID-focused effort, Hultström and the others started a biobank collecting samples and physiological information from COVID-19 patients in the ICU.

The three-man team found a rhythm for their work as they cycled through ICU shifts. If they weren’t in the ICU, they were working on COVID-19 research or at home sleeping. If two of them were busy, the third could handle emailed questions from collaborators.

“We have nothing specific for treating you once you’re in intensive care that would improve your survival or treat your disease. We [only] know how to maintain physiological stability.”

“Most questions we didn’t even need to discuss,” Hultström says. “One of us answered and the other two were like, ‘Yes, we were going to write that.’ … We had a very fruitful way of working where we could keep the activity high even though we had big commitments in the clinic.”

And the clinic filled up. Before the pandemic, Uppsala typically operated near its limit of ICU beds, just 10 maximum. (Sweden has fewer than five ICU beds per 100,000 inhabitants, lower than most Western countries.) Just a few weeks into the pandemic, the ICU was taking over other wards within the hospital, ultimately expanding to more than 30 beds.

Hultström and his colleagues kept busy, stabilizing patients and doing their best to treat the poorly understood disease. When lulls came between pandemic waves, Hultström devoted more energy and attention to research, combing through the growing biobank for insights. A better understanding of human genetics, he thought, might help ICUs develop new treatments that could stop the ribonucleic acid (RNA) virus in its tracks.

RNA is used by human bodies to translate DNA and trigger the production of various proteins. When a virus, such as coronavirus, uses RNA to hold genetic information, the cells it encounters respond by making the virus-demanded proteins—which multiplies the virus through the body. But some people have a gene that plays good defense: OAS1.

“It was known that this OAS1 gene was an important antiviral gene,” Hultström says. Put simply: The OAS1 gene triggers production of the OAS1 protein. That protein then senses the presence of viral RNA and activates an enzyme that breaks down the acid, protecting human hosts from worsened infection.

Because COVID-19 is an RNA virus, OAS1 is a key protein that protects people from critical illness. It was also one of the most significant findings that Hultström’s team helped uncover through collaboration with other groups. “It quickly went to the pharmaceutical industry and was taken up by some companies to see if they could do something with it,” Hultström says.

Many other genes that turned out to be significant for severe COVID-19 infection had to do with the lungs, mucus production, inflammation and fibrosis-related proteins (which could impact lung scarring). Hultström’s team also found that hyper-coagulation, or aggressive blood clotting, was common among the critically ill.

These findings led to changed clinical practices at Uppsala and, in some cases, even went international with entities such as the United Kingdom’s National Institute for Health and Care Excellence referencing Hultström and his colleagues’ studies in updated guidelines for COVID-19 care. 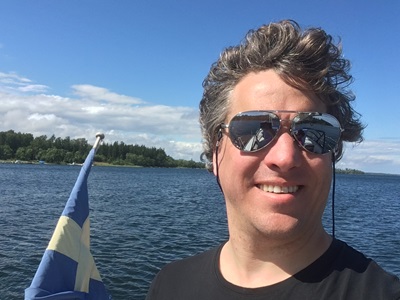 Meanwhile, the Uppsala team participated internationally with the COVID-19 Host Genetics Initiative, which combined efforts from countries around the world to uncover the genetics behind susceptibility to the virus. That work continues today, with Hultström currently focused on long COVID. At the time of this writing, there’s one genetic hit for the extended illness—and it’s also a risk factor for severe COVID-19. (Hultström will be sharing more of this work at the 2023 American Physiology Summit. See sidebar.)

With Uppsala operations mostly back to normal, Hultström and his fellow intensivists are now working to extend the ICU biobank nationally in Sweden. Hultström says all of the country’s major hospitals and ICUs are on board, as are the medical registries and Biobank Sweden, which serves as an umbrella organization for nationwide Swedish biobanks. They aim to launch the patient enrollment process in early 2023, and Hultström hopes the biobank’s first data release will take place in 2024. Already, at Uppsala, the ICU is collecting samples from patients that have a whole range of illnesses other than COVID-19.

“We need to be able to identify new ways of interacting with critical illness and helping these patients,” Hultström says. In time, with Sweden’s major ICUs contributing, Hultström hopes they’ll have enough information to understand the underlying mechanisms of critical illness—and find treatments that can turn patients around.

This article was originally published in the January 2023 issue of The Physiologist Magazine.

Long-COVID Experts Meet at the Summit

Learn more about what we know—and still need to understand—about long COVID at the 2023 American Physiology Summit, which will be held April 20–23 in Long Beach, California.

Michael Hultström, MD, PhD, will be a part of the game-changer session “The Race to Understand Long-term Covid-19” with Stanley Perlman, MD, PhD, of University of Iowa, and Patricia Silveyra, PhD, of Indiana University.

The moderated panel discussion will look at the current research on post-acute sequelae of COVID-19 from animal models and translational research. It’s one of several game-changer sessions, which will feature some of the biggest topics impacting life and health today.

Learn more and register for the Summit at www.physiology.org/APS2023.