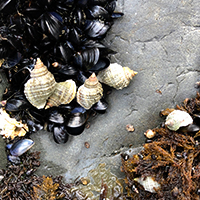 (San Diego) October 29, 2022—The Pacific blue mussel (Mytilus trossulus) is a foundational and beneficial species in the intertidal environments of the northern Pacific Ocean. Comparative physiologists have recently studied how two aspects of climate change—warming temperatures and increasingly acidic waters—may affect this ecologically important species. The scientists present their findings this week at the American Physiological Society (APS) Intersociety Meeting in Comparative Physiology: From Organism to Omics in an Uncertain World conference in San Diego.

As a foundational species, Pacific blue mussels create habitat and maintain ecosystem function, much as corals do in a coral reef. They are also of growing economic value in Alaska, with about 8 million mussels cultivated each year on aquatic farms.

For marine life that relies on calcium for their outer shells—such as mussels—climate change is a double whammy. It means not only warming temperatures but also changes in the pH of their habitat. That change in pH can make calcium more scarce.

As carbon increases in the atmosphere, an increasing amount of carbon is absorbed by seawater, setting off a chemical reaction that makes the ocean more acidic. This is called ocean acidification. According to the National Oceanic and Atmospheric Administration, surface ocean waters have already become approximately 30% more acidic. Mussels, like other calcifying shellfish, rely on calcium carbonate to make their shells. But calcium carbonate dissolves in acidic environments. In fact, it is even used in common antacids, such as Tums.

For this study, the research team used tide pools in Sitka, Alaska, to simulate different aspects of climate change. Some tide pools were artificially warmed, some artificially acidified, and others were both warmed and acidified. They monitored the mussels for six months, testing shell strength and thickness at three time intervals.

The thinning of the shell could make the mussels more vulnerable to predators. The strengthening seen in the combined pools could make feeding on them harder for drilling or crushing predators, which itself may reverberate through the ecosystem.

This “research is shedding light on how alterations in individual level physiological responses of coastal shellfish can scale up to influence ecosystem level processes. Ultimately, this research will help us better anticipate coastal ecosystem vulnerability under future climate change,” Rangel explains.

NOTE TO JOURNALISTS: The Comparative Physiology: From Organism to Omics in an Uncertain World conference will be held October 28–31 in San Diego. To schedule an interview with the researchers,  conference organizers or presenters, contact APS Media Relations or call 301.634.7314. Find more highlights in our Newsroom.