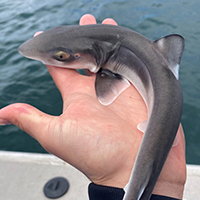 (San Diego) October 29, 2022— Preliminary research data suggest warmer temperatures and increased salt levels might have negative effects on the behavior and physiology of school sharks. A clear indicator of physiological changes is higher levels of stress markers such as glucose and lactate concentrations in the blood. Researchers also noted behavior changes according to the warmer and saltier the environment is and the more time school sharks spend resting. School sharks are usually constantly swimming. A break in their usual activity means they might be too stressed to find food or escape predators. The findings will be presented this week at the American Physiological Society (APS) Intersociety Meeting in Comparative Physiology: From Organism to Omics in an Uncertain World conference in San Diego.

Researchers also examined the response of school sharks to increases in temperatures and salinity levels based on neonatal and juvenile (one year old and older) stage. The findings show newborns were more tolerant of some of the environmental changes than juveniles. This suggests neonates might have a special ability at birth to inhabit coastal waterways where freshwater mixes with salt water before migrating into deeper waters as juveniles.

The shallow water home of school sharks is constantly fluctuating, but this natural variation is being exacerbated due to the rapid pace of climate change. As a result, researchers through this study were seeking to determine “if this endangered species will be able to continue using these protected, resource-rich waters, or if they will be forced out into the ocean, which may have major ecological implications for the survival of the species.” They specifically wanted to know if the nursery ground in southeast Tasmania will remain a viable area for school shark pups in the coming years. To reach their conclusion, researchers evaluated the physiology and biochemistry of neonatal and juvenile sharks.

“Hopefully, these findings will be able to guide or inform regulations that can improve shark health,” said Katherine Ollerhead, a PhD candidate at the University of Tasmania in Australia and co-author of the study.

NOTE TO JOURNALISTS: The Comparative Physiology: From Organism to Omics in an Uncertain World conference will be held October 28–31 in San Diego. To schedule an interview with the researchers or conference organizers or to request the full abstract number 101, “The impacts of climate change on the physiology and biochemistry of school sharks in Southeast Tasmania,” contact APS Media Relations or call 301.634.7314. Find more highlights in our Newsroom.