It’s Not the Heat, It’s the Humidity: Water Loss Hurts Bees Most in the Desert 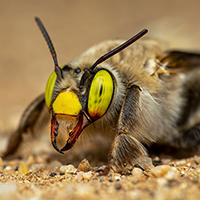 (San Diego) October 29, 2022—Digger bees lose large amounts of water during flight, which compromises their activity period and survival in the desert heat. Researchers from Arizona State University will present their work this week at the American Physiological Society (APS) Intersociety Meeting in Comparative Physiology: From Organism to Omics in an Uncertain World conference in San Diego.

Climate change plays a role in the physiological evolution and survival of animals of all sizes. Desert animals, already acclimated to high temperatures, use evaporative heat loss to help prevent overheating. However, the sometimes-limited ability to replenish water loss means the danger of dehydration is a challenge for desert animals, including the Sonoran Desert digger bee.

Bees are an integral part of the ecosystem due to their ability to pollinate—more than 80% of flowering plants rely on insect pollinators. When bees become unable to pollinate sufficiently—due to lack of food or other changes in their environment—plant biodiversity decreases and plant-eating animals are affected. A large percentage of food crops, including fruits, nuts and vegetables, also depend on pollination. Researchers explored the effects of heat, water stress and food availability on male digger bees in the Arizona Uplands, a region of the Sonoran Desert.

During the study, air temperatures increased from around 66 degrees F in the early morning—when the bees began to fly to a mating site—to about 100 degrees at midday, when they typically stop flying for the day. In addition, no plants were in bloom at the study site to provide nectar for the bees to drink at the time of the study. Marking techniques used by the research team suggest that the bees survive for about a week, which means they are finding nectar somewhere in the desert. Researchers think the bees may be traveling for some distance during the later—and hotter—part of the day to find food.

The researchers also examined the bees’ body temperature and body water content throughout the day. The hottest body temperature measurement was approximately 111 degrees F. Digger bees can withstand body temperatures around 125 degrees during flight, suggesting that overheating is not why the bees stopped flying before midday, explained Meredith Johnson, a doctoral candidate at Arizona State University and first author of the study.

Water loss is a bigger problem for the insects. “These bees lose 17% of their body water content per hour, with the amount slightly increasing as the air temperature [rises],” Johnson said. “Loss of about 50% of total body water content is lethal, suggesting that these bees can maximally fly for about three hours.”

The flying time constraint is important to note, as typically bees need to fly for six or seven hours each day searching for mating opportunities. Without sufficient time to mate, the bee population will shrink in the future.