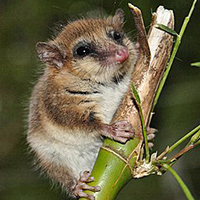 (San Diego) October 29, 2022—A South American marsupial with ties to an ancient line of animals may go extinct in the next half-century due to warming temperatures. Researchers from the Universidad Austral de Chile will present a mathematical model of the monito del monte’s survival predictions this week at the American Physiological Society (APS) Intersociety Meeting in Comparative Physiology: From Organism to Omics in an Uncertain World conference in San Diego.

The monito del monte, native to the rainforests of South America, is a marsupial in the relict family Microbiotheriidae. These tiny animals typically weigh about 20 grams (0.7 ounce) and measure around 3 to 5 inches long. Monitos reproduce and prepare for winter hibernation during the summer. Preparation includes eating as much as possible—including fruit, insects, small birds and other dead animals—to store as body fat. Researchers estimate that monitos need to have fat reserves that are almost twice their body weight to survive the winter.

Climate change predictions show that ambient temperatures in coastal Chile will increase an estimated 36.5 degrees F over the next 50 years. This will have a large impact on the ability of the monito population to survive the winter. The warmer temperatures will cause the animals to come out of hibernation earlier than usual, and they will be unable to find food during the winter, explained Roberto Nespolo Rossi, PhD, first author of the study. Nespolo and his research team developed a mathematical model to estimate survival rates for the monito population in the advent of global warming.

The mathematical model uses an algebraic formula to connect days of winter survival with the ambient temperature. The calculations are based on the assumption that all of the monitos’ daily energy expenditure during hibernation comes from the fat stores they have accumulated during the warmer months.

The model “is one of the few predictive models built on physiological parameters, so it can be applied to other hibernators, for which there is plenty of physiological data,” Nespolo said. “Our predictions for 50 years … indicate that most coastal populations [of monitos] will go extinct,” he added. This is especially important because the monito, sometimes referred to as a “living fossil,” is the last living relative of the ancient marsupial order Microbiotheria.