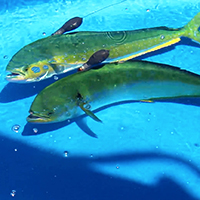 “Understanding the true impacts of oil spills is important so that we can appropriately understand the risks involved in continued oil exploration and drilling.” —Lela Schlenker, PhD

According to the National Oceanic and Atmospheric Administration, commercial fishermen harvested over 275,000 pounds of mahi-mahi from the Atlantic and Gulf of Mexico, with recreational fishermen landing another 6.3 million pounds from the same region.

Having established models to estimate spawning events between 2016 and 2018, the research team conducted a brief oil-exposure experiment on wild mahi-mahi. The team collected and tagged 50 fish, holding them for around 14 hours on the back of a research vessel in the Gulf of Mexico. During this time, about half the fish were exposed to oil while other, control fish were not exposed. All 50 mahi-mahi were released back into the Gulf of Mexico, and satellite tags attached to the fish collected data on each fish’s temperature, depth, migrations and acceleration patterns. These data could be applied to the models developed earlier to estimate spawning. Wild tagged control mahi-mahi were tracked in the Gulf of Mexico for 0–46 days while oil-exposed fish were followed for 0–37 days.

At first glance, the exposed fish appeared to behave the same as the control fish. Their speed and migration patterns were alike. However, stark differences arose with more detailed analysis. For the first eight days post-exposure, the oil-exposed fish became so susceptible to predation that their likelihood of survival dropped to less than half that of control fish. First author of the study Lela Schlenker, PhD, points out that this threat could not have been observed in a lab-only study, in the absence of predators.

Survival rates for the oil-exposed fish that lasted past the first eight days returned to that of the controls but another, perhaps even more concerning, pattern emerged. None of the oil-exposed mahi-mahi appeared to spawn for the remainder of the observation time, a little over a month. Control fish spawned an estimated six times over that period. “Spawning may be a more sensitive metric of recovery and may take substantial time to recover,” Schlenker notes.